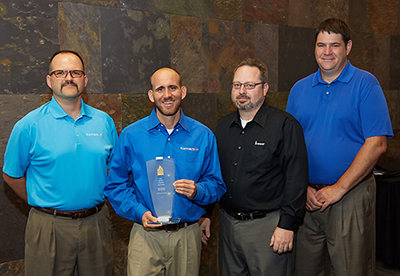 On September 24, 2014 Syd Panzer and the Konnection team were awarded the ICC Firebrand Award. Their project was featured in this year’s Discovery Gallery and was on display throughout the Ignition Community Conference. Entitled “Fine Grained Precision”, this projects main focus was to control and track grain.

For this particular project, the problem was that there was no traditional HMI. The Ignition application handled the device level control of every motor at the facility. The application was on a single server running a MySQL database. There were three clients, one PLC connection to an Allen Bradley ControlLogix, about 12,000 real-time tags and a few transaction groups logging about 1,500 points of data. The original project was developed in Ignition version 7.5 and it fully leveraged templates and UDTs.

Syd and his team created an Ignition application, fulfilling the need for both control and data at the facility. As with many grain elevators, operators are able to put a truckload of grain into any bin. Additionally, they need to unload the grain out of those bins and blend it with other bins to be shipped out on a train.

Grain Elevators typically have hundreds of pieces of equipment and all of those pieces need to be in the correct state (conveyors are on, gates are open, distributors are set for the correct hole) for the grain to get routed to the correct destination.

The automation system now allows the operator to select a single source and single destination for the grain path. The system turns on all the necessary equipment and puts it in the correct position. Controls were also built in for running the individual pieces of equipment in manual mode for maintenance functions.

While handling all of the controls, the system now records a large amount of data that many grain facilities are now finding beneficial due to new FSMA regulations that will be in place beginning in August of 2015. The prevention of explosions at grain elevators is another important feature that this application added. Along with all of the typical trending done on the amperages of conveyors, Konnection also trended the bearing and rub block temperatures for all of the conveyors. The operators can look at historical data and be proactive about the replacement of bearings and belt realignments, preventing dangerous conditions before they develop.

Konnection built in another key historical piece called the historical mode function. With this mode, a snapshot is taken of the entire facility on a minute-by-minute basis. This snapshot shows which pieces of equipment were running, the open/close status of all gates, what hole the distributor was on, which paths were being used, what commodities were being conveyed, how well the equipment was being utilized, what commodities were in the bins and how full the bins were. The operator can go into historical mode and select any historical time from the list provided and effectively see the status of the elevator in that moment of time. The benefits of this mode speak for themselves. Operator accountability is a benefit. An operator may have said that he started transferring grain from Bin 1 to Bin 2 at 2:00 but the system will show that he didn’t begin until 3:30. Additionally, Bin transfers will be recorded also and may show that instead of transferring from Bin 2 to Bin 5, as manager requested, that the operator transferred from Bin 1 to Bin 3. The system will help identify these kinds of errors.

The historical mode can also be very helpful after a contamination issue. It will help determine the root cause. Catastrophic events can also be tracked using this application. The historical mode, along with all of the other data logging that is being done, can offer many clues as to what led up to the event.

In the project for this facility, several different indicators were used to show what was going on in the facility. The indicators included the status of the motor, the commodity being conveyed and the leg path that was being utilized.   When Konnection engineered this particular project, it may have set up Wheat to be displayed as Yellow, but the customer may have requested that they wanted the color for Wheat to be Brown. Konnection set up all the templates to get the style information from a database table. Konnection had the ability to go into the database table and change the color to customer’s preference and also propagate the change throughout the whole project at the same time.

If you are interested in seeing how Konnection can help your grain facility get automated, find out more about Konnection at www.konnection.com. Syd and the Konnection team are excited to put their software to work for you!

Konnection is a division of Kasa Companies, along with IntelliFinishing and Kasa Controls & Automation.

Distributed Baggage Handling Systems Are the Future of Efficiency and Accuracy

Ronda Baker, 2 months ago
All, Grain

adm, 2 years ago
All

Ronda Baker, 1 year ago
All, BHS

Ronda Baker, 5 months ago
All, BHS